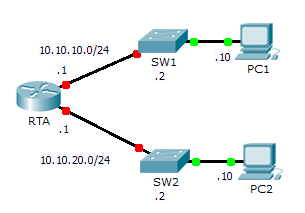 In this activity, you will configure RTA with basic settings, including IP addressing. You will also configure SW1 for remote management and configure the PCs. Once you have successfully verified connectivity, you will use show commands to gather information about the network.

Issue each of the following commands and then answer the related questions:

Which command shows only the IP address (no subnet mask or prefix)? show ip interface brief

Which command displays the description configured on the interface? show interfaces

Which command displays the MAC address of the interface? show interface

Issue each of the following commands and then answer the related questions:

What does the L at the beginning of the lines within the routing table represent? Local connection

What does the /32 prefix listed in the route table indicate? The host address of the interface

Step 3: Gather information after an interface state is changed.